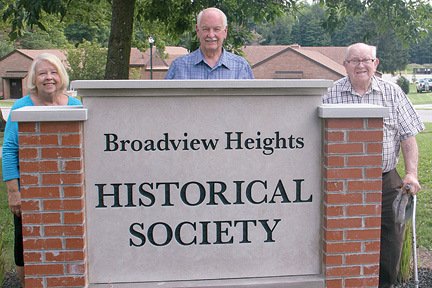 The Broadview Heights Historical Society has a new home on the city’s campus at 9543 Broadview Rd. after being stuck in the basement for 19 years.

The building that now houses the historical society (a nonprofit since May 2001) underwent extensive renovations before the society moved in, said Don Faulhaber, lifelong Broadview Heights resident and member of BHHS.

“Over the years, residents have preserved historical items, and now these items will have a secure place for future generations to research the city’s history,” Faulhaber said.

A $150,000 grant from the state covered the cost of renovations, said Candy Korn, BHHS president.

“It was a huge undertaking, and now, three years later, we are finally home,” Korn said. “Over the 19 years that we were kind of ‘homeless,’ we did have a tiny office in the basement of City Hall, where we housed papers and artifacts given to us.”

Once the society received the grant, members asked the public to donate items such as old yearbooks, family artifacts and collections of Broadview Heights newspapers.

“We were able to get the word out to the residents that we were now in a position to accept more donations, and they came in abundance,” Korn said.

Broadview Heights residents should be impressed with the society’s collection of artifacts and papers, said Korn.

“I think the community is going to be very pleased and proud of what they see when they walk in,” she said. “Broadview Heights will be able to join the communities around us who have had historical societies for some time.

“Our purpose is to preserve and protect the history of the city, which includes not only dry and boring papers but highlights the farm beginnings of the city and the hard work done by those who were here in the early years, via items and photos.”

The society’s opening will include a Salute to the Military display, Korn said.

“We were blessed with an amazing amount of items to display from all branches of the military and include the various wars and conflicts,” she said. “We expect that many visitors will have to come back to really view everything we have displayed.”

Added Faulhaber, “We have uniforms, many helmets and honor rolls of Broadview Heights residents who served in wartime, starting with World War I.”

Several objects from Broadview Heights’ farming past will be on display as well.

“We have a rope bed from the Avery Family, a single hand wringer washing machine and farm tools, to cite a few,” he said.

BHHS also has every issue of the Broadview Journal starting from 1991, Brecksville-Broadview Heights High School yearbooks from 1939 and the Pollen Count Alumni Newspaper from 1972.

After the open house, the society will continuously add new items to its collection, Korn said.

“Parts of the opening display will remain for a few months, and we will continually add items and themes so our visitors can keep coming back,” she said. “We plan to have programs periodically, inviting both professionals and residents to speak about Broadview Heights. … We welcome visitors of all ages and plan on having programs directed at children and young adults.”

Next year, Korn said the society plans to host celebrations honoring the 60th birthday of the city.